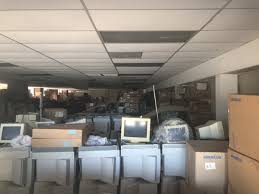 In the era before Amazon and boutique custom built PCs, computer enthusiasts visited humble local computer stores to buy things like RAM, graphics cards, and computer games sold in big cardboard packages. They had names like PC STORE, Computer King, and Computer Factory Outlet. The last is the name of an abandoned store rotting away in a lonely strip mall in Norman, Oklahoma. Closed for a decade, Computer Factory Outlet is locked tight and somehow still full of merchandise.

It's like a time capsule of the early 2000s personal computer industry. Dell and Gateway boxes press against the glass, turning yellow in the sun. Beige PC towers loom in ramshackle piles. PC copies of the Tiger Woods 99 video game gather dust on the shelves.

The store caught the attention of Joshua Trammell, who used to get his haircut from a barber in the same shopping center when he was a kid. "We used to go into the store when I was younger," Trammell told Motherboard on the phone. "The woman in there would be very abrupt with us because we were little kids running around a computer store."

Norman, Oklahoma is a small college town about two hours north of the Texas border. "Since I moved away from Norman, it's just always been the same. The same front. The same window display," he said. Trammel is back in Norman after getting laid off from his job as the manager of a candy store. He decided to go back by the old store and take photos of it. He wanted to "let everyone reminisce a bit about how gorgeous it looks."