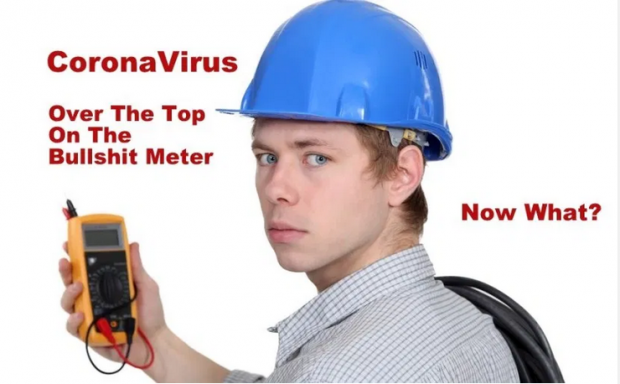 The whole "CoronaVirus" thing sprang on the American scene before the ink was dry on the US Senate's written Decision on the liberal Democrat's "Impeachment Hoax" ending one more attempt to interfere with the activites of a duly elected US President.

This new attempt, the "CoronaVirus" situation, was a bit different in that it was aimed right at Trump Supporters, and was designed to punish all of us for daring to support our President.  It was aimed directly at two main conservative bastions:  (1) older people with savings and common sense, and (2) our private sector economy.  Did you notice that it was America's small businesses, typically Republican, that took the "shutdown" hit?

There is NO QUESTION that this so-called Covid 19 was designed, and built out, in a high end bioweapons lab.  Having said that, it becomes obvious that it was AIMED at a specific segment of Planet Earth.

What ARE we going to do about this?

The first thing, of course, is to figure out exactly what happened, and who was involved.

The second thing is MASSIVE UNBRIDLED REVENGE. We'll call it "justice" in the history books.

We may have actual court trials, or we may not.  We do have that section of the National Defense Authtorization Act (NDAA) Section 1021 which says:

" includes the power to detain, via the Armed Forces, any person "who was part of or substantially supported al-Qaeda, the Taliban, or associated forces that are engaged in hostilities against the United States or its coalition partners", and anyone who commits a "belligerent act" against the U.S. or its coalition allies in aid of such enemy forces, under the law of war, "without trial, until the end of the hostilities authorized by the [AUMF]".

Our Intelligence Community has the means to listen in on EVERY email, telephone conversation, etc. on Planet Earth.  Obama set up that network, thinking he was going to hand that tool over to Empress Hillary.  Now, all those cameras and listening devices. are in OUR hands.  Let's use them.

It is NOT hard to find an investigative starting point.  I wouldn't start with China.  I'd start with the first group of "reports" of US CoronaVirus victims.  There we'd find gold.  What do I mean?  Let's start with the so-called "confirmed reports" of "six dead people in a Nursing Home in Washington State."  Remember that one?

(1)  Where did these six early-onset Nursing Home (hospice?) people GET the CoronaVirus (Covid-19).  Did they fly to Wuhan, China, and have the "Bat Soup" for lunch?  Did they just get off a Cruise ship from Hong Kong?  Of course not.

(2)  How did the local health authorities determine, and verify (confirm), that these people died from Covid-19?  Remember the screaming that "there were no tests?"  There is STILL no test for Covid-19.  The only test available, even now, is for the whole range (about 1,100) of normally occuring, and relatively harmless, CoronaVirus varieties.

(3)  And, if there really was a shortage of "tests" how did ANY of those locations determine that ANYONE had Covid-19?

(4)  How is it that the liberal "fake news" media have these stories before anyone else did?