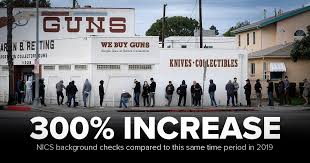 In other words, if you feel that the country is about to fall into a crime-ridden depression where thugs might kick down your door for what's in your fridge, you shouldn't be able to defend yourself or your family.

The resolution calls on the counties of Alameda, Contra Costa, Marin, San Francisco, San Mateo and Santa Clara to conduct surveys on the health threat posed by the surge in weapons purchases - using completely unsupported claims in the text, according to Breitbart.

WHEREAS, The NRA has induced such panic buying by engaging in reckless fear-mongering, using this national crisis as an excuse to grow corporate profits and scare more people into buying guns.

WHEREAS, More guns do not keep Americans safe because in reality, nearly 400 million civilian-owned guns in America have not stopped 40,000 annual gun deaths and thousands of gun injuries.