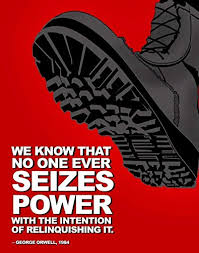 Or the retro-nightmare future that might-have-been, had it not been outdone by reality. Aldous Huxley – famous author, heir to the intellectual threads of Eugenics, Darwinism, Fabian Socialism and Humanitarian Scientism as a world religion – made his disagreements with his former pupil George Orwell quite clear in a 1962 speech at Berkeley as well as in writings like Brave New World: Revisited.

Orwell's stark and forceful police state manufactured and maintained order with the psychological dominance of the ever-watchful Big Brother, by utilizing high-tech surveillance, the editing of reality, the propagation of dizzying misinformation and rule by an iron fist.

For Aldous Huxley, however, Orwell had missed the point. The Nazis and Soviets were incomplete models for the emerging world order. The real tyranny was scientific in its approach, sophisticated and slight in its maneuvered hand. Mankind wouldn't face naked oppression as much as he would be pacified by easily obtained goods, engineered societal rewards and the use of literal opiates – refined pharmaceutical drugs – to make the masses "learn to love their servitude." This would constitute the ultimate revolution – oligarchical domination administered by a scientific and expert elite. What Orwell had described would be crude compared to the studied social programs of indoctrinated helplessness.

But Orwell had not missed the point at all (certainly not entirely) – he understood that this was domination nonetheless, no matter how concealed the bludgeoning arm was behind the velvet gloved-hand. The true purpose of socialism is not the "good of others" [i.e. the masses] but the control by the few – the elite or oligarchy – of the many by an overarching system that made them controllable.