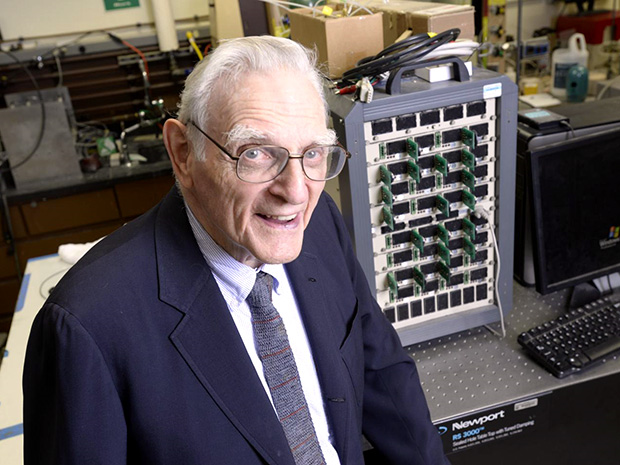 A patent application for a new battery that uses glass as a key component has been submitted by a team headed by John Goodenough, the part winner of the 2019 Nobel Prize in Chemistry for his work as co-inventor of the now ubiquitous lithium-ion battery that is the go-to power source for electric cars and energy storage.

And the new glass battery promises to accelerate the shift away from internal combustion engines because it will deliver a significant increase in storage capacity.

By "spiking" glass with either sodium or lithium to form an electrode within the battery, the researchers say the new battery technology provides three times the energy storage capacity of comparable lithium-ion batteries.

It is also neither volatile nor flammable, and does not display issues of lithium dendrite growth that plagues li-ion batteries, which can cause short-circuits and present safety hazards.

First described in a 2016 paper published in Energy and Environmental Science, and now in a patent application activated on Sunday on behalf of the LNEG (National Laboratory of Energy and Geology) in Portugal, the University of Porto, Portugal and the University of Texas, the new glass battery electrode has the potential to upturn the transport industry.

That is, if it is commercialised. But according to Goodenough, who spoke with IEEE's Spectrum magazine about the technology, the glass battery could finally break through the price barrier that hinders the uptake of electric cars.

"I think we have the possibility of doing what we've been trying to do for the last 20 years," Goodenough, who is emeritus professor at the Cockrell School of Engineering at the University of Texas, Austin, told Spectrum.

"That is, to get an electric car that will be competitive in cost and convenience with the internal combustion engine."

It could also be used to store intermittent solar and wind power on the electric grid, Goodenough tells Spectrum.

Addtionally, the glass battery electrode has shown it can withstand a wider range of temperatures – between -20º C and 60º C.

"Rechargeable batteries containing a water-solvated glass/amorphous solid electrolyte described herein can provide a safe, low-cost stationary battery capable of storing a large amount of electrical energy for feeding the grid or charging the battery or capacitor of an electric vehicle since the temperature range of operation of a stationary battery can be kept small through all seasons at little cost," reads the patent.