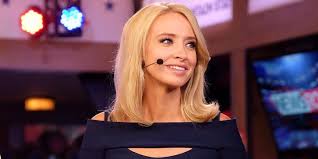 The news was first reported by CNN and the New York Times.

Why it matters: Grisham will leave after nine months without ever having held a formal press briefing.

As Axios reported last week, new White House chief of staff Mark Meadows had privately discussed replacing Grisham with McEnany or Pentagon spokesperson Alyssa Farah — who will also be joining the White House press team.
Grisham told Axios last week: "Sounds like more palace intrigue to me, but I've also been in quarantine. If true, how ironic that the press secretary would hear about being replaced in the press."
Melania Trump's previous chief of staff, Lindsey Reynolds, resigned earlier this week to spend more time with her family, according to the White House.
The big picture: Meadows is looking to overhaul a communications shop that's kept a low profile since President Trump ended the tradition of daily press secretary briefings.

McEnany, the new press secretary, is a Trump loyalist with experience defining the president on TV.
Farah will be the new director of strategic communications within Meadows' office. She has firsthand knowledge of the White House after previously serving as Vice President Pence's press secretary, and is a longtime Meadows ally.