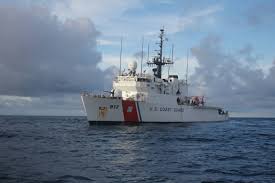 That was corrected Wednesday, as Trump, surrounded by the country's top officials, announced an expanded military presence near the Venezuelan shores that had been unseen for decades.

Secretary of Defense Mark Esper, National Security Council Director Robert O'Brien and Attorney General William Barr all said during the press conference that the additional military is meant to crack down on "counternarcotics operations," but is also aimed at denying funds to Maduro and his closest allies, who have been recently indicted in the U.S. on drug trafficking charges.

"When we started the maximum pressure policy in January, the president analyzed what our military assets were in the Western Hemisphere because obviously, all the options were and are on the table," a senior administration official told the Miami Herald.

"There was no balance; most of our assets were in the Middle East, Asia, etc., so he asked to recalibrate those assets to have the necessary presence in the hemisphere to see where this situation was going" regarding Venezuela, he added.