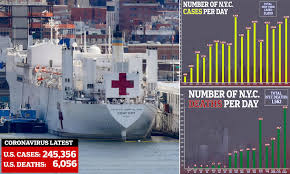 On Thursday, though, the huge white vessel, which officials had promised would bring succor to a city on the brink, sat mostly empty, infuriating local hospital executives. The ship's 1,000 beds are largely unused, its 1,200-member crew mostly idle.

Only 20 patients had been transferred to the ship, officials said, even as New York hospitals struggled to find space for the thousands infected with the coronavirus. Another Navy hospital ship, the U.S. Naval Ship Mercy, docked in Los Angeles, has had a total of 15 patients, officials said.

"If I'm blunt about it, it's a joke," said Michael Dowling, the head of Northwell Health, New York's largest hospital system. "Everyone can say, 'Thank you for putting up these wonderful places and opening up these cavernous halls.' But we're in a crisis here, we're in a battlefield."

The Comfort was sent to New York to relieve pressure on city hospitals by treating people with ailments other than COVID-19, the illness caused by the coronavirus.