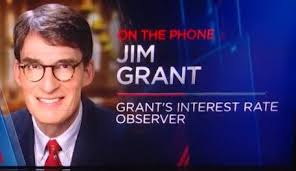 Grant began by slamming Jay Powell's seemingly blinkered proclamation that "he sees no prospective consequences with regard the purchasing power of the dollar" as "very concerning" adding more pertinently that he thinks "that wilful ignorance is a clear-and-present-danger for creditors of The United States."

It appears his fears are starting to be warranted as USA Sovereign credit risk is rising...

"I am in favor of life going on," says Grant when asked by the anchor, "shouldn't The Fed do something amid this massive global shutdown?"

The alternative, the venerable bond guru exclaims is the direction we are heading - "shutting everything down and putting the government in charge."

Bernie Sanders may (or may not) be out of the presidential race but, as Grant highlights, "his programs are being implemented in fact daily."

"One can die of despair as well as disease," warned Grant, reminding viewers of the consequences of mass self-incarceration.

"I think it would be a fatal error."

His retort shut down her argument quickly:

"The delegation of political and economic authority to the US government to suppress this crisis is a clear and present danger."