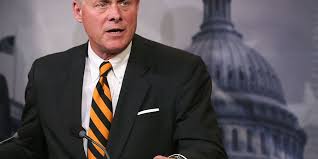 Included in the probe is Sen. Richard Burr (R-NC), who sits on two committees that received in-depth briefings on the hyper-virulent disease which started in a wet market located in Wuhan, China (900 feet from a biolab experimenting with bat coronavirus).

Burr sold shares of companies worth as much as $1.7 million, according to the report, saving he and his wife at least $250,000 in losses based on their March 19 close.

The lawmaker has said he based those decisions on public information, including CNBC's reports out of Asia at the time, and asked the Senate ethics panel to review his trading. An attorney for Mr. Burr, Alice Fisher, said Mr. Burr would cooperate in the Senate review "as well as any other appropriate inquiry." -Wall Street Journal

"Senator Burr welcomes a thorough review of the facts in this matter, which will establish that his actions were appropriate," said Fisher.

On March 20, Fox News' Tucker Carlson noted that the senator had sold "more than a million dolars in stock in mid-February after learning how devastating the Chinese coronavirus could be."

"He had inside information about what could happen to our country - which is now happening - but he didn't  warn the public. He didn't give a prime time address. He didn't go on television to sound the alarm. He didn't even disavow an op-ed he'd written just ten days before claiming America was 'better prepared than ever for coronavirus."