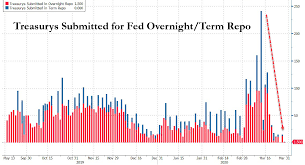 Today's "zero bid" auction was merely the logical endgame of a recent collapse in Treasury submissions into the Fed's massive daily term and overnight repo operations, which climaxed two weeks ago, only to plunge as soon as the Fed announced the start of unlimited QE.

With dealers now able to sell unlimited amounts directly to the Fed, and at a premium to carrying values, most of them appear to have picked that option instead of holding on to paper that may be worthless especially with an avalanche of debt coming down the pipeline as the Treasury has to fund its $2 trillion corporate handout package.

"Why on Earth you would tie something up for three months in repo with the Fed buying," said Ian Burdette, managing director at Academy Securities, who followed up with a very apt observation: "I think people are getting wise to the fact that an absolute tsunami of global sovereign debt issuance is on its way. Best to sell it all to the fed now probably."

Another hint that the Fed may have overliquified the market, soaking up too much "safe, money-like collateral" such as Treasuries and MBS, and injecting too many reserves (i.e., cash) came from the Fed itself which 30 minutes before the close today announced it would taper "QE-unlimited" and cut the amount of TSY purchases starting April 1 from $75BN to $60BN, while also trimming its MBS QE from $50BN to $40BN.