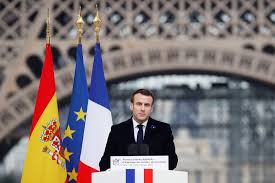 What's going on in the fifth largest economy in the world arguably points to a major collusion scandal in which the French government is helping Big Pharma to profit from the expansion of Covid-19. Informed French citizens are absolutely furious about it.

My initial question to a serious, unimpeachable Paris source, jurist Valerie Bugault, was about the liaisons dangereuses between Macronism and Big Pharma and especially about the mysterious "disappearance" – more likely outright theft – of all the stocks of chloroquine in possession of the French government.

Respected Professor Christian Perronne talked about the theft live in one of France's 24/7 info channels: "The central pharmacy for the hospitals announced today that they were facing a total rupture of stocks, that they were pillaged."

With input from another, anonymous source, it's now possible to establish a timeline that puts in much-needed perspective the recent actions of the French government.

Let's start with Yves Levy, who was the head of INSERM – the French National Institute of Health and Medical Research – from 2014 to 2018, when he was appointed as extraordinary state councilor for the Macron administration. Only 12 people in France have reached this status.

Levy is married to Agnes Buzy, who until recently was minister of health under Macron. Buzy was essentially presented with an "offer you can't refuse" by Macron's party to leave the ministry – in the middle of the coronavirus crisis – and run for Mayor of Paris, where she was mercilessly trounced in the first round on March 16.