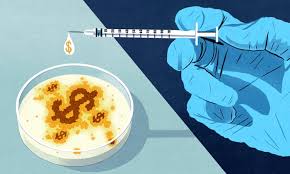 Didier Raoult is Professor of Microbiology and the leading world specialist in treatment of infectious diseases.  He is the director of IHU Mediterranee Infection Institute.  He was part of a clinical trial in which hydroxychloroquine and azithromyin healed 90% of Covid-19 cases if they were tested very early.

From the article by Pepe Escobar in the Asia Times reprinted below:

For years, Raoult has been pleading for a drastic revision of health economic models, so the treatments, cure and therapies created mostly during the 20th century, are considered a patrimony in the service of all humanity."That's not the case", he says, "because we abandon medicine that is not profitable, even if it's effective. That's why almost no antibiotics are manufactured in the West."

On Tuesday, the French Health Ministry officially prohibited the utilization of treatment based on chloroquine recommended by Raoult. In fact the treatment is only allowed for terminal Covid-19 patients, with no other possibility of healing. This cannot but expose the Macron government to more accusations of at least inefficiency – added to the absence of masks, tests, contact tracing and ventilators.