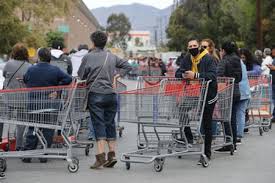 Jones was the charismatic founder of the cult-like People's Temple. Through fear-based control, he took his followers' money and ran their lives. He isolated them in Guyana where he convinced over 900 of them to commit suicide by drinking cyanide-laced grape Kool Aid. Frightened people can be made to do anything. They just need a Jim Jones.

So it is more than a little scary that media zampolit Rick Wilson wrote to his 753,000 Twitter followers: "People who sank into their fear of Trump, who defended every outrage, who put him before what they knew was right, and pretended this chaos and corruption was a glorious new age will pay a terrible price. They deserve it." The tweet was liked over 82,000 times.

The New York Times claims that "the specter of death speeds across the globe, 'Appointment in Samara'-style, ever faster, culling the most vulnerable." Others are claiming Trump will cancel the election to rule as a Jim Jones. "Every viewer who trusts the words of Earhardt or Hannity or Regan could well become a walking, breathing, droplet-spewing threat to the public," opined the Washington Post. Drink the damn Kool Aid and join in the panic en route to Guyana.

The grocery store in Manhattan, just after the announcement of the national state of emergency, was pure panic. I saw a fight break out after an employee brought out paper towels to restock the shelf and someone grabbed the whole carton for himself. The police were called. One cop had to stay behind to oversee the lines at the registers and maintain order. To their credit, the NYPD were cool about it. I heard them talk down one of the fighters, saying, "You wanna go to jail over Fruit Loops? Get a hold of yourself." Outside New York, sales of weapons and ammunition spiked.

Panic seems to be something we turn on and off, or moderate in different ways. Understanding that helps reveal what is really going on.