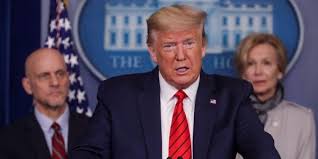 Update (1215ET): An FDA spokesperson has just contradicted the president's claim that the agency had approved a malaria medicine for the treatment of Covid-19. According to the spokesman, who was speaking to a reporter via phone, no approval has been given.

Update (1210ET): President trump confirmed he was open to the virus bailouts being predicated on restrictions from the companies receiving them including no bonuses, no buybacks, and an equity stake:

Update (1150ET): As expected, President Trump said Thursday that several new medications have been approved by the FDA for immediate treatment due to the exceptional circumstances. The drugs approved have been used for other reasons, but weren't approved for use against the coronavirus.