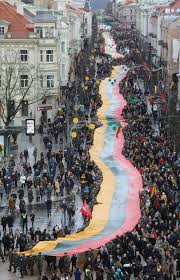 On March 11, 1990, the tiny country of Lithuania unilaterally declared independence from the Soviet Union, the largest empire in the world.

Thirty years ago, on March 11, 1990, Lithuania unilaterally declared independence from the Soviet Union. More precisely, it declared that the Soviet occupation of Lithuania, enabled by secret agreements between the Soviets and Nazi Germany, was unlawful, and restored the independent Lithuania of 1918. Latvia and Estonia soon followed.

This set off a chain of events that, together with the Fall of Berlin Wall (1989) and an attempted military coup in Russia (August 1991), led to dissolution of Soviet Union.

Just like that, the evil empire was no more.

A Living Testament to Freedom

I was 9 at the time, so I could not comprehend the scope of the geopolitical and historical changes happening. Actually, I doubt many adults did, either. But one thing was clear: Lithuanians wanted freedom, independence, and less Russia in Lithuania. These were the maxims that trumped all other concerns. If anyone ever doubted the power of ideas, this is yet another testament to the power of belief.