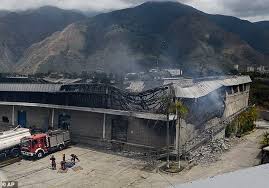 The government-backed National Electoral Council reported that Saturday's blaze obliterated 49,323 voting machines at the facility in the capital, Caracas.

'We have decided to start this offensive against Maduro and his people, because he has plunged our people into hell, now we will take this flame to them,' declared a masked man, alleging to be a member of the Venezuelan Patriotic Front, in a video that was shared by the opposition group on social media Sunday.

'On March 7, Operation Sodoma began in the warehouses of the CNE [National Electoral Council], this entity that has violated the rights of the people in fraudulent elections through the CANTV [National Telephone Company of Venezuela], where the data controlled by Cuba's servers are issued, and that the accomplices of the CNE, like Tibisay Lucena [president of the entity], have allowed. We do accept elections that cannot be manipulated by any program or biased entity.'

Lucena shot back at the Venezuelan Patriotic Front's claims Monday, and said the latest incident would not prevent a planned vote to replace lawmakers in the last opposition-controlled federal institution.