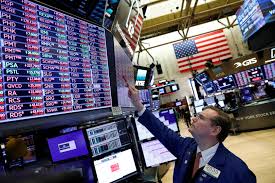 Oil prices suffered the biggest plunge since the Gulf War in 1991 over the weekend, leading the Dow Jones Industrial Average to open down 1,000 points while the UK's FTSE 100 fell 550 points on opening as coronavirus fears shake global markets.

Crude oil prices plummeted 30 percent in a trade war between Saudi Arabia and Russia sparked by the virus.

While stock futures on the Dow sank 1,000 points, S&P 500 futures and Nasdaq Composite futures lost more than four percent of their value.

The drastic plunge triggered circuit breakers on CME contracts on Sunday night to stop prices from falling even  further.

London's index of its 100 most valuable companies was predicted to open at least 300 points down this morning but the drop was almost twice as bad as coronavirus cases raced towards 110,000 worldwide. It plunged 8.5 per cent this morning and saw its value bomb by £130billion - a freefall not seen since the 2008 financial crash.

Among the biggest losers were oil giants BP and Royal Dutch Shell, whose stocks tumbled more than 20 per cent.