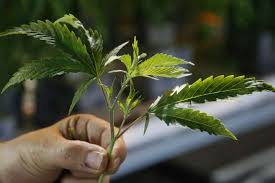 Jessica, with wavy hair that falls halfway down her back, is a practicing herbalist, acupuncturist and aromatherapist who teaches classes on the health benefits of cannabis. Scruffy-bearded Chip wears a jacket with a prominent "grower" patch and hosts a marijuana podcast called "The Real Dirt." They started their pot business in rugged Humboldt County when it was the thriving epicenter of marijuana cultivation.

But the couple bid goodbye to the weed-friendly West and moved somewhere that might seem like the last place they would end up — Oklahoma.

They're part of a green rush into the Bible Belt that no one anticipated when Oklahoma voters approved medical marijuana less than two years ago. Since then, a combination of factors — including a remarkably open-ended law and a red state's aversion to government regulation — have created such ideal conditions for the cannabis industry that entrepreneurs are pouring in from states where legal weed has been established for years.

Though 11 states have fully legalized marijuana for recreational use, Oklahoma's medical law is the closest thing to it: Anyone with any ailment, real or imagined, who can get a doctor's approval can get a license to buy. It's not hard to do. Already, nearly 6% of the state's 4 million residents have obtained their prescription cards. And people who want to sell pot can do it as easily as opening a taco stand.

"Oklahoma is really allowing for normal people to get into the cannabis industry, as opposed to other places where you need $20 million up front," said Jessica Baker.

Ranchers Sell Off Cattle And Farmers Idle Hundreds Of Thousands Of Acres...