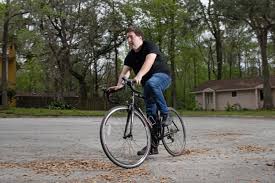 Zachary McCoy, 30, learned he was a burglary suspect in Gainesville, Florida, after Google's legal investigations support team sent him a notice

Some advocates argue this is violates constitutional rights and privacy, but authorities said it's helpful to finding criminals

He proved to authorities that he was riding his bike, not canvasing the home

McCoy was later removed as a suspect