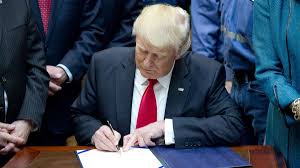 GOP leaders are already talking about a potential 30-day extension of provisions in the Foreign Intelligence Surveillance Act while they try to hammer out a deal with Democrats.

Trump's comments in an hour-plus meeting on Tuesday night came despite a push from Attorney General William Barr to modify the law administratively to appease the president, who has railed in the past against the spying law after authorities used it to monitor an associate of his 2016 campaign.

"The president made it exceedingly clear he will not accept a clean re-authorization … without real reform," Sen. Rand Paul (R-Ky.), told reporters after the meeting. "He was told by the attorney general, we can massage around the edges and we can fix this through regulation, the president didn't accept that, pushed back very vigorously and said 'we're not doing this.'"

rump instead told the lawmakers: "You all work out a bipartisan deal and come back to me and I'll sign it," according to a source in the room.

Aides to Speaker Nancy Pelosi (D-Calif.) and House Minority Leader Kevin McCarthy (R-Calif.) are having staff level discussions on "discrete provisions where there are possible bipartisan compromises," according to a source familiar with the discussions. There is no sense among lawmakers that a deal is imminent at this point, and the provisions are set to expire on March 15.