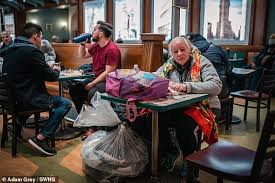 Lady Gaga's father is refusing to pay $260,000 in rent and fees for his Grand Central Terminal restaurant and bar, claiming that the New York City homeless population is hurting his business.

Joe Germanotta, owner of Art Bird & Whiskey Bar, told The Post that the homeless population in Grand Central's basement food court cut his business by 30 percent since he opened the spot in 2018.

'The homeless go in there to stay warm. We're compassionate, but it affects our customers. When the homeless invade our areas, it becomes a less attractive place,' he said.

Germanotta and other business owners said that, in addition to the homeless problem, a rodent infestation, outdated facilities and old furniture are also turning customers away.

Germanotta said he's frustrated with the Metropolitan Transit Authority's, or MTA, refusal to tackle ongoing problems and said although he wants to stay, he can't afford to do so under those conditions.

He said: 'I don't think they were prepared [to manage the space]. Quite frankly, I think they're more interested in running the trains.'

If appropriate steps aren't taken to clean up and reinvigorate the space, Germanotta said he'd leave and expects the MTA to compensate him the money he's invested.