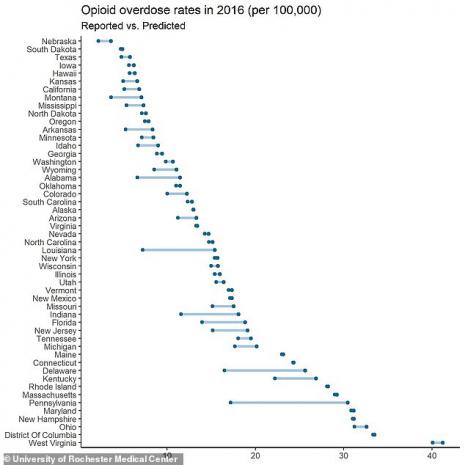 After analyzing overdoses from 1999 through 2016, a researcher discovered there were 99,160 additional deaths attributed to opioids that went unclassified.

These deaths were found in several states, including Alabama, Mississippi, Pennsylvania, Louisiana and Indiana, where the estimated number of losses more than doubles.

Researchers say the lack of correct data is obscuring the scope of the opioid crisis and potentially affecting programs and funding intended to confront the epidemic.

Elaine Hill, Ph.D., an economist and assistant professor in the University of Rochester Medical Center (URMC) Department of Public Health Sciences and senior author of the study, said: 'A substantial share of fatal drug overdoses is missing information on specific drug involvement, leading to underreporting of opioid-related death rates and a misrepresentation of the extent of the opioid crisis'.

'The corrected estimates of opioid-related deaths in this study are not trivial and show that the human toll has been substantially higher than reported, by several thousand lives taken each year.'