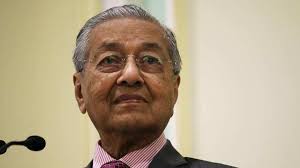 The 94-year old Prime Minister of Malaysia, Mahathir Mohamad, who returned to power in 2018, announced his resignation on Monday in a mere two-line statement offering no details.

He was asked to stay on as interim leader by the country's king upon his resignation at 1pm local time. It follows a weekend of political turmoil, which will now continue this week as the question of a new government remains hanging in the balance. As Al Jazeera reports:

Mahathir's decision follows a weekend of political wrangling, after it was reported on Sunday night that his party was planning to form a new government that would exclude his anointed successor, Anwar Ibrahim.

...Anwar also said that Mahathir has no plans to join with anyone from the previous ruling coalition he defeated to try to form a new government.

When asked if Mahathir was responsible for the current political turmoil, Anwar blamed "those within my party and outside using his name."