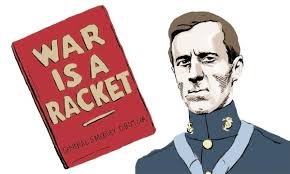 For all but a few activist insiders and scholars, U.S. Marine Corps Major General Smedley Darlington Butler is now lost to history. Yet more than a century ago, this strange contradiction of a man would become a national war hero, celebrated in pulp adventure novels, and then, 30 years later, as one of this country's most prominent antiwar and anti-imperialist dissidents.

Raised in West Chester, Pennsylvania, and educated in Quaker (pacifist) schools, the son of an influential congressman, he would end up serving in nearly all of America's "Banana Wars" from 1898 to 1931. Wounded in combat and a rare recipient of two Congressional Medals of Honor, he would retire as the youngest, most decorated major general in the Marines.

A teenage officer and a certified hero during an international intervention in the Chinese Boxer Rebellion of 1900, he would later become a constabulary leader of the Haitian gendarme, the police chief of Philadelphia (while on an approved absence from the military), and a proponent of Marine Corps football. In more standard fashion, he would serve in battle as well as in what might today be labeled peacekeeping, counterinsurgency, and advise-and-assist missions in Cuba, China, the Philippines, Panama, Nicaragua, Mexico, Haiti, France, and China (again). While he showed early signs of skepticism about some of those imperial campaigns or, as they were sardonically called by critics at the time, "Dollar Diplomacy" operations -- that is, military campaigns waged on behalf of U.S. corporate business interests -- until he retired he remained the prototypical loyal Marine.