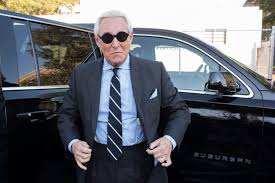 His expertise is the lawful destruction of the opposition candidacy — what is known in the trade as opposition research. In that process, he has made enemies, some of whom have sought to destroy him.

That process of destruction began a year ago, when he was ordered out of the bedroom that he shared with his wife, and out of their home at 5:30 in the morning by no less than 23 federal agents carrying assault weapons. Behind his home on a Fort Lauderdale canal was a government boat filled with federal agents. Above his home was a government helicopter also filled with feds. All of this was captured in real time by CNN, which the feds had unlawfully tipped off about the coming raid.

Notwithstanding the armada the government sent to fetch Stone, a Florida federal judge, who noted that a phone call to Stone's lawyers would have produced him, released Stone without the obligation of posting bail. He was soon indicted for lying to Congress, intimidating a witness and obstruction of justice. Last fall, he was convicted on all counts, and the trial judge unconstitutionally prevented him from speaking publicly. The prosecutors recommended a 7- to 9-year sentence to the trial judge. In Stone's case, he faces a maximum of 50 years in a federal prison.