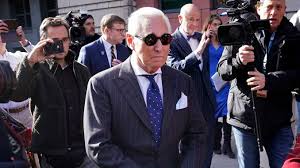 "The truth still exists, the truth still matters. Roger Stone's insistence that it doesn't ... are a threat to our most fundamental institutions," Jackson said in a blistering denunciation of Stone, who lied about efforts to obtain damaging emails related to Hillary Clinton's 2016 Democratic presidential campaign that were stolen by Russian agents.

The judge said that Stone's crimes should arouse "dismay and disgust" that "transcend" political affiliation, before ordering him to serve 40 months in prison, pay a $20,000 fine, spend two years of supervised release and perform 250 hours of community service.

But Stone, 67, will not have to serve that sentence just yet — and possibly not ever.