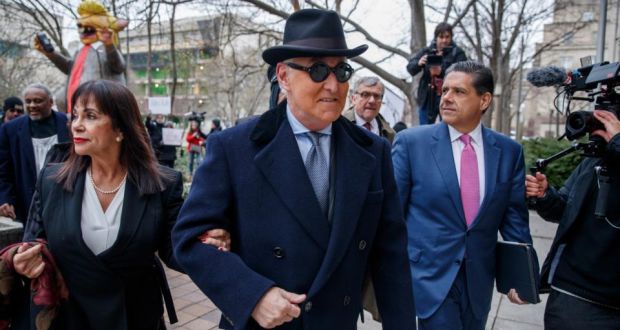 -President Donald Trump's friend Roger Stone was sentenced to more than three years in prison for crimes related to lying to Congress and tampering with a witness.

-Trump has criticized the case against Stone, who lied to a House committee about his contacts with Trump's campaign related to WikiLeaks.

-Stone's sentence by Judge Amy Berman Jackson will be suspended until she rules on his motion seeking a new trial based on alleged juror misconduct.

-Attorney General William Barr has been criticized for demanding a new sentencing recommendation for Stone that was sharply less than what trial prosecutors first requested.

A federal judge sentenced President Donald Trump's friend, longtime Republican operative Roger Stone, on Thursday to more than three years in prison for lying to Congress and tampering with a witness in an effort to protect Trump.

"The truth still exists, the truth still matters. Roger Stone's insistence that it doesn't ... are a threat to our most fundamental institutions," Jackson said in a blistering denunciation of Stone, who lied about efforts to obtain damaging emails related to Hillary Clinton's 2016 Democratic presidential campaign that were stolen by Russian agents.

The judge said that Stone's crimes should arouse "dismay and disgust" that "transcend" political affiliation, before ordering him to serve 40 months in prison, pay a $20,000 fine, spend two years of supervised release and perform 250 hours of community service.

But Stone, 67, will not have to serve that sentence just yet — and possibly not ever.