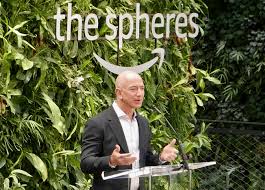 Jeff Bezos, founder of Amazon, announced on Instagram that "climate change is the biggest threat to our planet" and he is launching the Bezos Earth Fund and committing $10-billion to the cause. Bezos omitted to mention that the project requires central banks to match his $10-billion at a rate of roughly 100 of theirs to his 1 and commit trillions more in a way that forces investors to buy Environmental, Social, and Governance (known as ESG exchange-traded funds), which is a category of investment that involves a group of securities in which Amazon stock always is listed among the top five. It appears that his $10-billion 'donation' could be an excellent 'investment'. –GEG

Just in case Greta Thunberg hadn't whipped up enough of a frenzy among those who are convinced the world will end in 12 years if central banks don't print several quadrillion dollars now and immediately fix the weather, while commercial banks are already salivating at the outsized profits generated by crowding their virtue signalling clients into all sorts of ESG portfolios (such as the ESG ETF whose top holdings are bizarrely Apple, Microsoft, Amazon, Google and Intel), moments ago the world's richest man slammed shut any further debate whether climate change (and ESG) is the next social mania, when he announced (on the wokest of places, i.e., Instagram), that he is committing $10 billion to fight climate change.