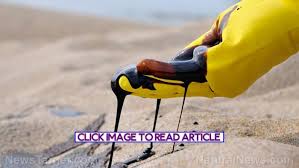 Diesel fuel is an extremely noxious pollutant: when spilled on water, it stays mainly on the surface, which ends up decreasing the water's oxygen concentration, resulting in the inhibition of the growth of aquatic flora and fauna; when spilled on soil, diesel gets absorbed underneath the surface, where it gets distributed mainly in the tillage layer and causes harmful effects not just on soil permeability, but also the growth of microorganisms, earthworms and crops.

What makes diesel fuel pollution and contamination even more troubling is that diesel fuel comprises approximately 35 percent aromatic hydrocarbons which take a long time to break down.

The researchers made the announcement through a paper published in the journal Science of The Total Environment.

The research team modified a nanosponge by silylation of amino silicon oil and aminopropyltriethoxysilane in order to obtain a hydrophobic nanosponge. This modified nanosponge can effectively control diesel fuel migration and then remove the said contaminant from water and soil through a hydrophobic siloxane group.

According to the researchers, this ability can decrease the negative effects of diesel fuel on plant growth, as well as on fauna such as earthworms and fish.

The researchers added that aside from being stable against coexisting ions and temperature, the new nanosponge also displayed a relatively good reuse performance, and that diesel fuel could be conveniently desorbed or separated from the sponge, thus facilitating its possible recycling. In addition, the process for making the sponge is said to be environment-friendly, low cost and simple.

The researchers hope that this development provides a promising approach to remediate diesel fuel contamination, making it potentially applicable in both environmental and agricultural fields.