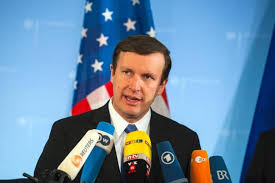 "Sen. Chris Murphy of Connecticut and other Democratic senators had a secret meeting with Iranian Foreign Minister Mohammad Jahad Zarif during the Munich Security Conference last week, according to a source briefed by the French delegation to the conference," the report says.

However, none of the senators immediately confirmed the meeting, which would undermine the Trump administration's policy stance on Iran, and brings up a host of potential legal issues.

Ironically this is the very thing Sen. Murphy has in the past accused Trump officials of doing during the 2016 transition period, specifically National Security Advisor Mike Flynn due to a phone call with Russian officials just before the administration entered the White House.

The legality of Congressmen meeting with FM Zarif is also questionable given last July the US Treasury brought sanctions against him. "Javad Zarif implements the reckless agenda of Iran's Supreme Leader, and is the regime's  primary spokesperson around the world.  The United States is sending a clear message to the Iranian regime that its recent behavior is completely unacceptable," Treasury Secretary Steven T. Mnuchin said at the time.