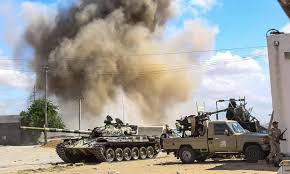 "The arms embargo has become a joke, we all really need to step up here," U.N. Deputy Special Representative to Libya Stephanie Williams said this weekend at an international security conference in Berlin.

"It's complicated because there are violations by land, sea and air, but it needs to be monitored and there needs to be accountability," Williams added, and noted further that Libya has over the past multiple months of fighting been flooded with advanced weapons.

Turkey especially is now openly sending military hardware as well as national troops and mercenaries from Syria to defend the UN-backed Tripoli government against Gen. Khalifa Haftar's ongoing offensive to take the capital.

A major conference last month also hosted in Berlin sought to shore up new commitments from backers on either side of the conflict to uphold the UN arms embargo. It also sought to impose a truce, which pro-Haftar forces refused to recognize from the start.

At this latest summit, a frustrated German Foreign Minister Heiko Maas urged EU foreign ministers to commit to monitoring the embargo closely, and to follow through with action.

"Everyone needs to know that - if they violate the embargo in future - then they violate a U.N. resolution and that this can't remain without consequences," Maas said, though without offering details on just how this would go enforced.