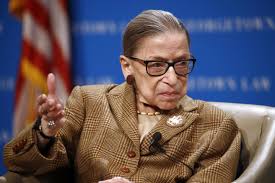 Ginsburg said that one of her life's goals -- enshrining prohibition of gender-based discrimination in the Constitution -- should be put on hold.

"I would like to see a new beginning," Ginsburg, 86, told moderator Judge M. Margaret McKeown, of the 9th Circuit Court of Appeals, at an event at Georgetown University's law school. "I'd like it to start over."

The Equal Rights Amendment, which stipulates "equality of rights under the law shall not be denied or abridged by the United States or by any state on account of sex," was introduced in the 1920s and passed by Congress in 1972. But the deadline to ratify the measure as a constitutional amendment expired in 1982.

Ginsburg's comments formed an unlikely alliance between the Supreme Court justice who has been pivotal to the feminist movement and conservatives who believe the ERA is a threat to their stances on abortion and transgender rights. Still, Ginsburg assured that she would like to see equal rights spelled out in the Constitution.

Watch the latest video at foxnews.com