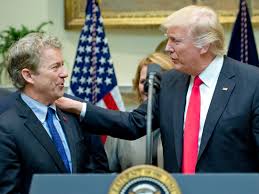 The New Hampshire Republican primary is widely expected to be uncompetitive, with Trump winning 97.1% of the vote in the Iowa Republican caucus earlier this week. However, a near-unanimous victory for Donald Trump in New Hampshire would rally his base in the state and boost the confidence of the campaign going into the November general election.

Trump is currently facing a primary challenge from Bill Weld, who previously served as Governor of the neighboring state of Massachusetts. Weld ran as the Libertarian Party vice presidential nominee in 2016, and deploying Rand Paul, a figure with broad appeal among libertarian voters, may help further dwindle Weld's share of the vote, particularly in libertarian-leaning New Hampshire.