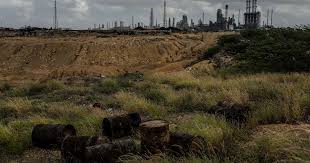 The opening is a startling reversal for Venezuela, breaking decades of state command over its crude reserves, the world's biggest.

The government's power and legitimacy has always rested on its ability to control its oil fields — the backbone of the country's economy — and use their profits for the benefit of its people.

But the nation's authoritarian leader, Nicolás Maduro, in his struggle to retain his grip over a country in its seventh year of a crippling economic crisis, is giving up policies that once were central to its socialist-inspired revolution.

Under Venezuelan law, the state-run oil company must be the principal stakeholder in all major oil projects. But as that company, Petróleos de Venezuela, or Pdvsa, unravels — under the weight of American sanctions, years of gross mismanagement and corruption — the work is unofficially being picked up by its foreign partners.