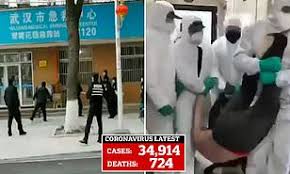 Video showing a man suspected of having coronavirus desperately sprinting away from officials trying to put him in quarantine has emerged, as the communist regime starts rounding up suffers in Wuhan and taking them to camps.

The clip, believed to be taken in Changqing Garden, Wuhan, shows a group of officials approaching the man who who is backed up against a wall.

The man suddenly starts running away from the officials who rapidly pursue him.

Some officials appear to be carrying large metal sticks as they run after him along nearly-deserted streets.

The clip, shared to Twitter on Thursday, comes after China's Vice Premier Sun Chunlan called on a 'people's war' against the fast-spreading epidemic.

Last week China's central government ordered the city - which is the epicentre of the virus - to round up all suspected patients as well as their close contacts in mass quarantine camps.

As of Saturday more than 700 people have been killed by the virus, with 86 people dying on Friday alone. More than 34,500 globally have been infected.

Another video, said to be taken in Suzhou near Shanghai, shows suspected coronavirus sufferers being forcefully dragged from their homes by officials in hazmat suits.