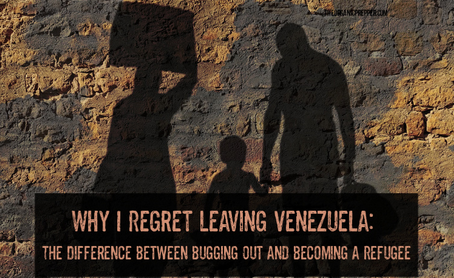 I've been thinking deeply about everything that has happened since I chose to leave Venezuela. (Whether it was a poor choice or not).

When things started going really bad, I had some reasons to believe, because of being partially isolated, that we were going to be subject to forced isolation; some abuses I saw being committed to coworkers inside the oil industry and without my major source of income just worked out to reinforce that idea. In those days, sanctions were not yet in place.

Suddenly I found myself with an email from my former online employer terminating our relationship. After recovering from that iced bucket bath, I started to look for some solutions immediately. One of my friends lost his phone while jogging and the thug who found the phone could get him into deep trouble. He was very close to being imprisoned. This was a close call because despite not having a position with much responsibility, there was a witch hunt so intense that it made me see it was just a matter of time before some jealous person would start messing with those not supporting the status quo.

Without any means to fight against these kinds of attacks, I decided not to expose my small family to such trauma. I had some savings (now long gone) but they were in a prepaid card, and it would be due in a few more months. I had no means to get that cash in any ATM in Venezuela, nor incorporate it to any payment system (something I have done now, with plans B, and C, and even D).

Looking back, things could have been done differently. We could have bugged out to our cottage. That was the original plan but the now-ex didn´t want to because she doesn´t have good relationships with my immediate family, and all of her family was abroad. It was not possible with just one salary and a house to maintain to make all the improvements I wanted at the cottage. We set up our townhouse instead, not up to the standard I wanted, but more or less to withstand some time without getting out. Just take a look at its description in my former articles.

For those fantasizing a Hollywood style escape (maybe with a guy like Brad Pitt on the driver´s seat), ramming other cars, with your team shooting out from the windows, in the middle of a general mess and a bloodbath, a dog-eat-dog fight around you…unless you live in a VERY bad part of town or in a place like Yemen, or some other similar location, I have a reality check. Forget about it. It´s just not likely to happen.

That is not what happens when you leave.

The real concern is that you and your team or family will be hunted down by whatever law enforcement happens to be around, will be declared a military target and will be statistics of crazed civilians in the commander´s report that afternoon. On the "positive" side this could be good for someone´s career: the one commanding the platoon that went after you.

The nature of our local SHTF is VERY complex. If you want to try to even begin to understand it, I will do my best in future writings. It has been an agony, especially for those living on government wages. Another portion of a very few fortunate like me, with an online job, could manage it for a while. But after a while, things went to heck because of the difficulties to keep even those jobs.

In my case, I had an alternative power supply but needed a constant internet connection. Without that, I couldn't survive financially. And after a while, that affected my performance at the job and I lost it. THAT was my SHTF because my wage on the day job was just worth enough for a couple of weeks of the month. Nowadays it wouldn´t even be worth a couple of days of food.

Maybe we did it wrong

In our case, the "bugging out" should have been in a hauling truck with all of our stuff piled up inside, up to the roof. Our family group would have become bigger.   And much happier (with the logical exception of my ex who just happens to hate my mother but that´s another story).

Don´t get me wrong. I´ve learned a lot in Lima, and here, despite having to work a lot (whenever I could get a decent job). I've been able to feed my family properly and kiddo has been more or less happy. As I've mentioned in other articles, my decision was because of the abuse the mafia lords who wanted to impose on the people handling foreign currency. Of course, there were a lot of black market speculators, risking themselves selling currency out in the open, and this, albeit not entirely illegal, was subject to the discretion of the political commissaries. Generally speaking, they would throw people in jail for some time depending on how much money could be paid to release them. Nothing new here. This happens in a lot of other failed states too.

The main origin of my regret is, I could have had my place prepared instead of supporting my ex´s family (in my own house) and consuming resources that could have been used to tune up the cottage. With that place adequate, we could have had some means to weather the worst of 2017, 2018 and 2019.