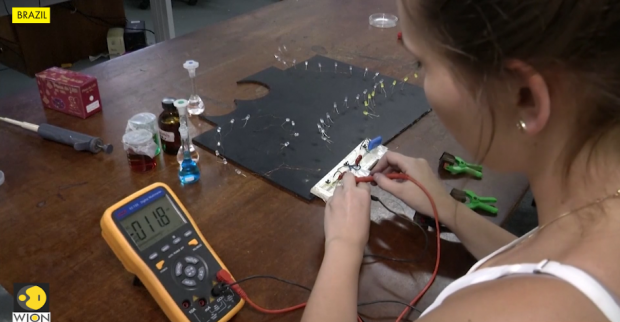 SANTA MARIA, Brazil (Reuters) - A Brazilian researcher has discovered a way to generate enough energy to power a small Christmas tree using about a penny worth of paper and graphite paint, opening a new possibility for cheap, sustainable electricity for poorer communities.

The improvised "batteries" draw energy from water vapor in the air, powering LED bulbs, she explained, estimating the cost of the materials involved at about 0.05 reais (1.2 cents).

"When we started out, we got very little energy," said Thiago Augusto, Moreira's research advisor at the Federal University of Santa Maria in Brazil's southern state of Rio Grande do Sul.

"Today, with the development of Kelly's research in her masters, we got enough energy to power 50 or 60 LED bulbs every ten seconds. It's a considerable amount of energy that is free, and which comes from the environment."

The technology is still in early development, but Moreira said she hopes it could eventually be used in homes, especially in poorer communities that could benefit from the low cost.

"We don't believe that this will replace other sources of energy, but in the world today, additional energy sources that are sustainable and renewable are always welcome," Moreira said.

Russia bets big on coal, gas, fossil fuels, and not on renewables

The Industrial Age Is Ending, Low-Tech Neo-Feudalism Will Replace It...