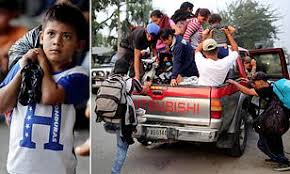 At least 8,000 asylum seekers from Central America, including many who were deported last week, will test Mexico's refusal to grant them unrestricted passage towards the United States by attempting to cross the border into the country yet again.

Hundreds of migrants gathered Thursday in San Pedro Sula, Honduras, and departed early Friday after word spread through Facebook channels and WhatsApp chain messages during the beginning of the week. The caravan is expected to be made up of at least 8,000 people.

The group was set to meet up with other refuge seekers in El Salvador to continue the 'Devil's Route' through Guatemala before an anticipated showdown with Mexican security forces at the border.

The latest caravan has been labeled the 'Devil's Route' because the migrants are setting out on the same path that a cargo train nicknamed 'The Devil' transits through, via the Mexican Pacific coast all the way to the Mexico-Texas border.

At the urging of the President Donald Trump, the Mexican government has clamped down on permitting caravan members free transit towards the 1,954-mile southern United States border after the administration threatened to impose tariffs on imported goods last year.