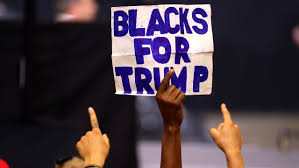 Both polls provide an obvious contradiction to the media narrative about President Trump appealing to "racists," hence why neither got a second of airtime on CNN or MSNBC.

The latest data out from Rasmussen Reports has black support as high as 42% overall among likely voters, with 29% "strongly" approving. One year ago today, Rasmussen had Trump polling at 21% approval among black voters, meaning that support has doubled in the past year.

The customary standard disclaimer here is that the margin of error (specific to the likely black voters sub-sample) is +/- 11. However, even with black support for Trump as low as 31% (which is still incredibly high for any Republican president), Trump still poses a threat to his competition in November. Republicans garnering 20% of the black vote would make effectively impossible for Democrats to win presidential elections, assuming that current trends of support hold constant among other demographics.