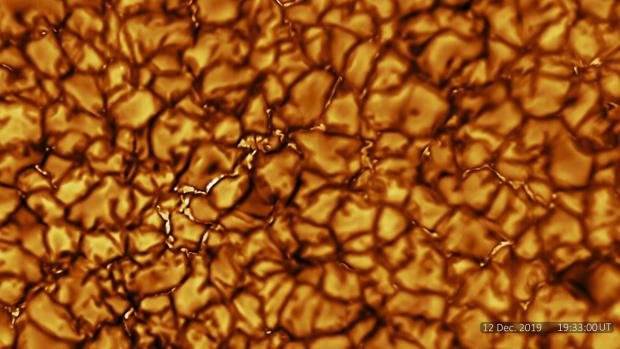 Activity on the sun, known as space weather, can affect systems on Earth. Magnetic eruptions on the sun can impact air travel, disrupt satellite communications and bring down power grids, causing long-lasting blackouts and disabling technologies such as GPS.

These first images from NSF's Inouye Solar Telescope show a close-up view of the sun's surface, which can provide important detail for scientists. The image shows a pattern of turbulent "boiling" plasma that covers the entire sun. The cell-like structures—each about the size of Texas—are the signature of violent motions that transport heat from the inside of the sun to its surface. That hot solar plasma rises in the bright centers of "cells," cools off and then sinks below the surface in dark lanes in a process known as convection.

"This image is just the beginning," said David Boboltz, program director in NSF's division of astronomical sciences and who oversees the facility's construction and operations. "Over the next six months, the Inouye telescope's team of scientists, engineers and technicians will continue testing and commissioning the telescope to make it ready for use by the international solar scientific community.

"The Inouye Solar Telescope will collect more information about our sun during the first 5 years of its lifetime than all the solar data gathered since Galileo first pointed a telescope at the sun in 1612," he added.