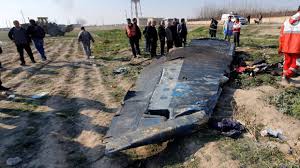 The downing of a Ukraine International Airlines' Boeing 737 in early January was "a complicated situation in a complicated time," Zarif revealed in an interview with Germany's Spiegel magazine, when pressed into explaining why it took three days for Tehran to admit their guilt.

"Others needed much more time. Almost 32 years ago, the US shot down an Iranian passenger plane. As of today, they still haven't issued an official apology," the chief diplomat said, referring to Iran Air's Dubai-bound Flight 655 which was shot down by the USS Vincennes cruiser in July 1988.

And unlike the US, Iran didn't promote those involved in firing missiles against a civilian target, Zarif reminded.

The American officer who was responsible for shooting it down even received a medal. Meanwhile, the Iranian man who shot down the Ukrainian plane is now in prison.