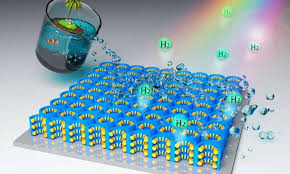 Hydrogen is viewed by many folks, particularly in Japan and Korea, as the clean-burning fuel that might power our vehicles in a low-emissions future. One way to produce hydrogen is to split it out of water. This is typically done by splitting water molecules into hydrogen and oxygen using electricity, but a potentially simpler and more efficient way to do it may be through photocatalytic water splitting, which uses light itself as the energy source instead of electricity, removing electricity production from the process altogether.

Nobody has yet managed to commercialize photocatalytic hydrogen production, but it's a hot area of research, and this OSU team claims it's discovered one of the most efficient photocatalytic molecules to date.

The molecule has shown a unique ability to use light from right across the visible spectrum. Where most previous photocatalysts have focused on high-energy ultraviolet wavelengths, this one can capture energy from ultraviolet, all the way through the visible spectrum and well into the near infrared range, meaning it can absorb up to 50 percent more solar energy than current solar cells.