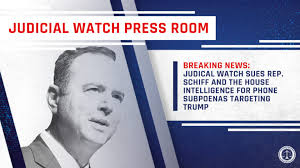 Judicial Watch filed the lawsuit under the public's common-law right of public access to examine government records after it received no response to a December 6, 2019, records request (Judicial Watch v Adam Schiff and U.S. House Permanent Select Committee on Intelligence (No. 1:19-cv-03790)):

-All subpoenas issued by the House Permanent Select Committee on Intelligence on or about September 30, 2019 to any telecommunications provider including, but not limited to AT&T, Inc., for records of telephone calls of any individuals;

-All responses received to the above-referenced subpoenas.

Schiff is a member of the U.S. House of Representatives, currently serving as Chairman of the United States House Permanent Select Committee on Intelligence. Schiff is being sued in his capacity as Chairman of that committee. The new lawsuit states:

The records are of critical public importance as the subpoenas were issued without any lawful basis and violated the rights of numerous private citizens.

Disclosure of the requested records would serve the public interest by providing information about the unlawful issuance of the subpoenas.

The requested records fall within the scope of the public's right of access to governmental records as a matter of federal common law.