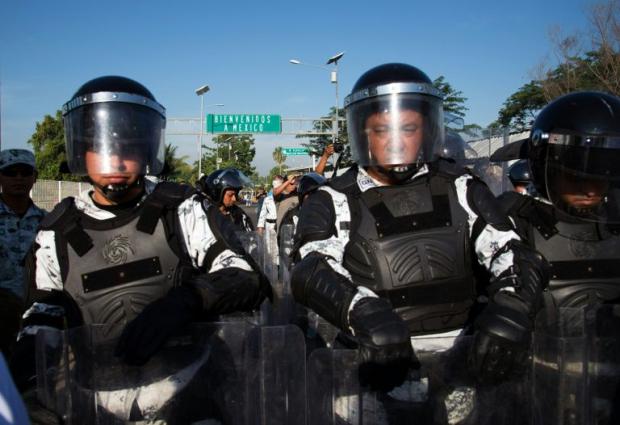 Standing on the wall above the Rodolfo Robles International Bridge that connects Mexico with its southern neighbor, National Guard General Vincente Hernandez told migrants they would be allowed to cross the border in a "controlled" manner.

"With order and respect, all will be served. There are opportunities for everyone," said Hernandez, who also coordinates the National Guard operations along the Suchiate River, the natural border between Mexico and Guatemala.

"We understand the situation, you are our brothers from Honduras, El Salvador, Guatemala," Hernandez told the caravan. His speech was met with applause.

Some 800 migrants agreed to regularize their status and seek employment in Mexico, an official from the National Institute of Migration (INM) said.

Earlier Saturday, troops had blocked the caravan, scuffling with the migrants as they attempted to cross the border.

One National Guard soldier standing guard at the bridge and speaking over a bullhorn told the travelers they could not enter without a visa or migration document, and that sneaking in was dangerous.