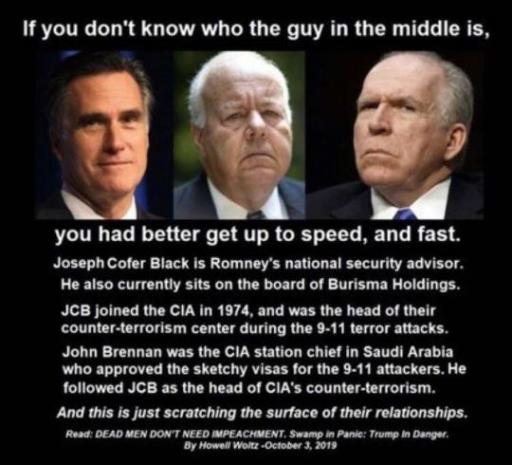 Mitt Romney adviser sits on Burisma board of directors

Well, this is certainly an odd coincidence!  In fact, when you dig in, you find an amazing series of coincidences...if you believe in coincidences when the CIA is involved, that is.

Mitt Romney's national security adviser in his 2012 campaign — a career CIA spook who rose to its top levels — sits on the board of directors of Burisma, the Ukrainian gas company that formerly paid Hunter Biden $50K a month despite his complete lack of credentials or qualifications.

It is also an odd coincidence that Mitt has, as CNN puts it, "been a lone Republican voice expressing concern about President Donald Trump's July phone call with Volodymyr Zelensky in which Trump asked Ukraine's President to investigate former Vice President Joe Biden and his family."

Still more oddly coincidental is the background of Mitt's adviser deep in the CIA, part of the Intelligence Community that has "six ways from Sunday" in foiling a mere president who might oppose it, according to Chuck Schumer.

Here are the specifics:

Back on October 6, 2011, presidential candidate Mitt Romney proudly announced that Joseph Cofer Black (listed as "Cofer Black") was among the people chosen as "special advisers":

... to advise Governor Romney on foreign policy strategy, defense issues, intelligence matters, counterterrorism, and regional policy. These advisers will assist Governor Romney as he presents his vision for restoring American leadership in the world and securing our enduring interests and ideals abroad.

Mr. Black brought to this role his extensive background at the CIA, which he joined in 1974 and where he trained for covert operations.  He rose rapidly through the ranks, becoming director of the National Counterterrorism Center from 1999 to 2002.  Coincidentally, this was the time in which al-Qaeda planned and carried out the 911 attack without hindrance from the counterintelligence apparatus of the Intelligence Community.  But Black was not penalized; he failed upward, being appointed ambassador at large and coordinator for counter-terrorism by President George W. Bush in December 2002.

And in yet another amazing coincidence, Black was succeeded in his job as director of the National Counterterrorism Center by John Brennan.

Cofer Black left the CIA in 2006 (does anyone ever completely leave the CIA after being a spook?) to join Blackwater, the huge contractor for services related to military and intelligence action, where he served as vice chairman until 2008.

Fast-forward to February 2017, when Black joined the board of directors of Burisma, six months after the departure of Hunter Biden.

When dealing with spooks, politicians, and big-time power politics, sometimes coincidences are not accidental.  But of course nobody wants to be a conspiracy theorist.