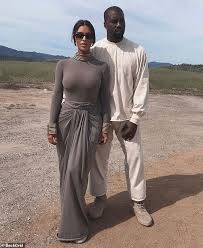 Kanye West's plans to move his Adidas Yeezy headquarters to Wyoming could save him millions in taxes but also could spell disaster for Adidas workers in Asia who risk being left jobless by the move, a charity group exclusively told DailyMail.com.

The rapper fell in love with the mountainous state after recording his album Ye there and snatched up a $14 million ranch near Cody, Wyoming in September.

Now the town, which has a population of around 10,000, is set to become home to West's new Adidas Yeezy headquarters instead of California, after the move was announced in November.

The month before, Kim Kardashian's husband echoed President Trump's vow to bring jobs from abroad back to the US, saying in a Beats 1 interview: 'For me, as a founder, it's really important to bring these jobs back to America.'

And while West could save up to $15 million by moving his headquarters to tax-haven Wyoming, it could leave sweatshop workers in Asia in even more dire circumstances, according to charity group Clean Clothes Campaign.