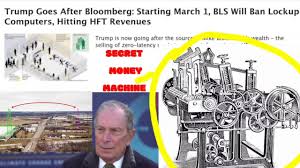 in an effort to "ensure a level playing field", a U.S. official told the same wire services that stand to suffer the most from this major overhaul of how economic data is disseminated in a time of HFTs, when a 1 millisecond delay can mean the difference between profit and loss.

As discussed on Tuesday, currently, the Labor Department hosts "lockups" for major reports lasting 30 to 60 minutes, where journalists receive the data in a secure room, write stories on computers disconnected from the internet, and transmit them when connections are restored at the release time.

And confirming our speculation that this was a way for the Trump admin to hit Mike Bloomberg and his eponymous organization where it hurts, the U.S. official, speaking on a conference call with journalists, said "the change is being made because several news organizations that participate are able to profit by providing the numbers to algorithmic traders in a format that provides them an advantage."

Translation: Trump is now going after the source of Mike Bloomberg's wealth - the selling of zero-latency market-moving information to HFTs.