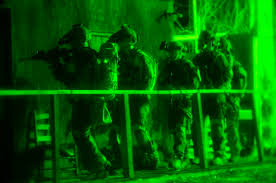 Tourists would either walk or drive across the bridge for a day of shopping at the market, eat lunch and drink a beer at the Cadillac Bar, and eat dinner, have drinks, and take in a floor show at some nightclub. When I was in high school, that's what we would also sometimes do on dates (sometimes without the knowledge or consent of our parents). It was all safe and secure. With the exception of sometimes having to pay a bribe to a cop for illegal parking, there were rarely any adverse incidents.

Not anymore. Nobody in his right mind would go into Nuevo Laredo except in a case of extreme necessity. That's because everyone is now subject to the very real possibility of being killed or kidnapped by drug cartels and drug gangs or caught in the crossfire of drug turf battles.

Why the problem now and not back then?

One simple reason: The war on drugs or, to put it another way, drug illegality. The drug war destroyed the tourism business in Laredo and Nuevo Laredo. In fact, with the exception of well-secured tourist resorts on Mexican beaches, the drug war has essentially destroyed the tourism business across the country. My parents drove from Laredo to Acapulco for their honeymoon. No one in his right mind would do that today.