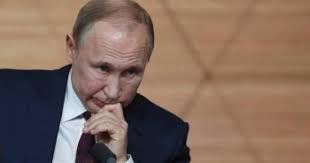 Vladimir Putin believes the Russian people will support his sweeping changes to the country's constitution that could keep him in power long after his presidential term ends.

The Russian President announced, as part of his annual state address on Wednesday, changes that could pave the way for him to extend his leadership beyond 2024.

A day after the shock announcement, that saw his entire government - including Prime Minister Dmitry Medvedev - resign, Putin said he believed the people supported these changes.

In his address, Putin a former KGB agent - whose term ends in 2024 - described how power would be shifted from the presidency to parliament and the state council, which currently only has an advisory role.

It comes as the Russian parliament overwhelmingly backed his surprise choice for a new prime minister, Mikhail Mishustin - a 53-year-old with almost no political profile.

The State Duma, the lower house of parliament, endorsed the nomination with 383 votes of 424 cast. Nobody voted against him; there were 41 abstentions.

Putin's No-Summit/Summit with Biden's Double Much Ado About Nothing

Farcical No Summit/Summit Day Arrives Between Putin and Biden's Double